The 2021 annual meeting of the Burgess Hillaton Cemetery Society will be held on Monday, August 9th at 7:00 PM at Canard Community Church

The Burgess Cemetery in Upper Canard, Kings Co., was incorporated in 1920 and was operated by the lot owners until 1965 when it was deeded to the Canard United Church. 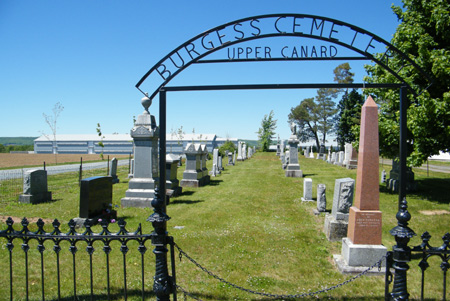 The Hillaton Cemetery was established in the1800's and was operated by the Methodist church in Canning which became Trinity United Church in 1925.

These two churches were amalgamated in Feb. 2012 and became Canard Trinity United Church.

Later in 2012 six United Churches were amalgamated and at that time it was revealed that the graveyards would not be included. The trustees of the former Canard and Canning Churches met and decided to incorporate the Burgess Hillaton Cemetery Society to take over the ownership and the operation of the two graveyards and this became effective on June 22, 2012.

The trust funds designated for the cemetery upkeep were transfered from the two churches before Orchard Valley United Church was established on July 1, 2012. A contract was signed with Ken Borden for maintenance and operation of the two graveyards in April, 2012, and has been renewed each year since.

Over many years of volunteer and casual paid work, records have been lost and it has been difficult to answer some of the inquiries regarding older lots. We are making improvements as time goes on. Surveys in Canard have been carried out and permanent survey-type markers are replacing wooden markers. Annual and special meetings are well attended and valuable suggestions are noted. As a result and due to the generosity of Beth Wade, a driveway on the west side of the Hillaton Cemetery was opened in 2017 and trees planted beside it. The driveway has been named "Bill's Way" in memory of the late Bill Wade.

We encourage lot holders to watch for the date of our annual meeting each Spring. The support of all interested in these two cemeteries will ensure that they continue to be fitting memorilas to the citizens resting there.

This website was built and is hosted by Steve Hatcher, an interior painter here in the Annapolis Valley by winter and a farmer for spring, summer and fall.

There are plots available for sale. Please inquire using the contact info below (postal mail or email).

Donations towards the upkeep, maintenance and improvements of the Burgess and Hillaton Cemetery's are greatly appreciated. You can send cheques to the mailing address below. If you would prefer to do an e-transfer please use the contact form below to reach us by email and we can reply with the email address an e-transfer should be forwarded to. To avoid spam we don't want to publish that address publicly here on the website.

Below is our postal mailing address. You can also use the contact form to send us an email.